Review: 'In The Heights' Is A Theatrical Spectacle Filled With Culture, Music And Emotion

Warner Bros.
Warner Bros.
For the past few years, there has been plenty of buzz about actor/singer/playwright extraordinaire Lin-Manuel Miranda due to his hit Broadway play Hamilton. Since it premiered in 2015, his revolutionary play was becoming mainstream, and it boosted his career to the point where he is hired by Disney to write songs for Mary Poppins Returns and Moana, while also starring in the HBO series His Darkest Materials, a leading voice role in the Netflix movie Vivo, and recently directed an upcoming Netflix movie Tick, Tick...Boom.
But last year, his popularity hit an all-time high when his play was showcased on Disney+ and ended up becoming one of the highest-streamed events of the year. Now, his popularity is going to skyrocket even more after seeing his newest movie project, In The Heights. And truth be told, we need more guys like Lin-Manuel who know how to make stories like these.
Based on the play written by Lin-Manuel Miranda, In The Heights is the story of the Washington Heights community in New York City, where each member is trying to follow their dreams of living a better life while also staying attached to their families. While Lin-Manuel was the director of Hamilton, he only plays a minor role as a side character and mainly acted as a producer, and Jon M. Chu was the director of this. Together, the two of them seemed to have had a clear understanding of the film's true intentions: to tell a story about following your dreams, the importance of family, and showcase the significance of the Puerto Rican culture that flows through Washington Heights.
Jon M. Chu is a director that started off with a rocky filmography, but we need to start giving him credit for his recent endeavors. Between this and Crazy Rich Asians, Chu seems to have nailed down his best qualities as a director and is finding the right projects to showcase his capabilities properly. While you can sense that this movie is Miranda's baby, Chu treats that with respect and uses his directing style to create a highly entertaining musical filled with awe-inspiring dance sequences that only make the already catchy music even more fun to watch. Despite its rather long runtime, you'll never want to take your eyes off the screen due to the powerful lyrics from Miranda and the creative choreography and cinematography from Chu.
While the medium is film, this translates as both a film and a Broadway musical. Using the power of movie magic, some aspects of the play manage to work well for a film. But besides those moments, it never shies away from staying true to its Broadway roots and winds up feeling like a staged musical too. Between this and the terrific acting all around, it helps characters become beloved and endearing, helping you connect to them on an emotional level from start to finish.

The cast from top to bottom is so vocally gifted that it makes me sick...with jealousy. I mean, who doesn't want to be great at singing.
It was clear from start to finish that the cast not only beloved Miranda and his words but also had a fantastic time filming this project. The whole cast delivered wonderful performances, filled with love sweat, and tears. Their chemistry and enthusiasm oozes off the screen and becomes infectious for the viewer watching.
Anthony Ramos (Hamilton) is the main lead, despite it being more of an ensemble film, and this is his coming-out party as the next big star in Hollywood. I already knew how gifted actor Corey Hawkins was after seeing him portray Dr. Dre in Straight Outta Compton, but I was over the moon by how blown away I was with his performance here. The other two standouts were actresses Melissa Barrera and Leslie Grace, who each were fantastic in both performances and singing capabilities. They were unknowns before this, but they won't be for long.
These are the types of blockbusters that audiences need: entertaining and interactive musicals that don't shy away from bringing forth themes and cultures and give audience all types of emotions. In The Heights is fantastic for doing all of these things, and now Hollywood needs to start following this trend. And please, don't see this on HBOMax. Go to a theater, where you will end up having a great theatrical experience with an amazing musical. 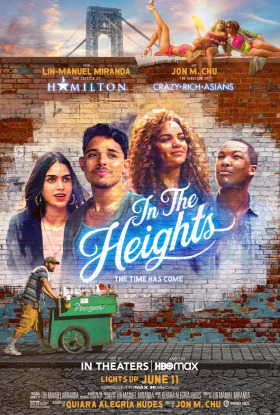