Walt Disney Studios
Walt Disney Studios
Just when the world has finally accepted Chris Evans hung up the shield, he ends up not being done just yet. Never say never, I guess.
Deadline is reporting that Chris Evans is nearly completed with a deal to return as Captain America to reappear in at least one Marvel property with the possibility of appearing in a second film. Their sources say it's unlikely to be a new Captain America movie and are predicting that it will be similar to what Robert Downey Jr. did with Iron Man in Captain America: Civil War and Spider-Man: Homecoming.


While Evans has initially said before he's done playing the character, we now live in a world where nothing is off the table. Examples like Hayden Christensen returning as Darth Vader in an Obi-Wan series and Tobey Maguire may be returning as Spider-Man only prove that when it comes to these franchises, all bets are off.
I don't know how this is going to work for the character or the overall MCU landscape, but I do know that whatever movie he will be in is going to get a lot more interest thanks to this news. 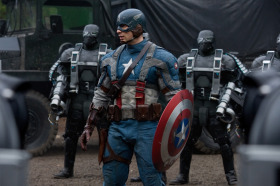