The story is about Zak (Zack Gottsagen) who is taken cared of by Eleanor (Dakota Johnson) in a retirement home, who loves watching wrestling videos. One day he escapes the home in order to pursue his dream of going to his wrestling hero's school for wrestlers to learn how to become one. Along the way, he is joined by Tyler (Shia Labeouf), who is trying to run away from his past mistakes.
It's when Zak and Tyler come together that the film turns into the entertaining road trip movie that it was marketed as. As they backpack through the South, they grow closer as friends, which feels genuine. You can tell that the actors clearly had a terrific relationship behind the scenes, and it really shows when they transfer it to their characters.
Throughout their adventure, you see the surrounding themes come into play in perfect doses. As they grow with each other, you see them slowly bond and find common ground despite their obvious differences. I loved how the story realized how unique true friendship can be. When Eleanor starts to play a larger role in the movie, themes of family become more prominent, and since the three of them each come from broken families, they end up becoming their own. It's beautifully crafted how their characters become so connected to each other and their love for each other feels so real.


The one theme that I felt the most drawn to was when the film shows how people can blindly be unfair to those who are different from them.
Take Zak for instance, who is clearly aware he has down syndrome and knows when he is bullied for it. This causes him to struggle with the idea of being the good guy in his own story, to the point where he wants to be the bad guy in wrestling rings. Meanwhile, Tyler also thinks of himself as a bad person, despite people around him seeing the opposite. This is seen in subtle ties to his past, which helps craft an understanding of why he views himself as such.
That's really my biggest takeaway from The Peanut Butter Falcon. This film realizes that a society discouraging others who are different from them has lasting subconscious consequences. No matter who they are, people should be treated with love and not hate, and that message hits home for me. It's maybe a simple message, but sometimes we need stories like this to help remind us. 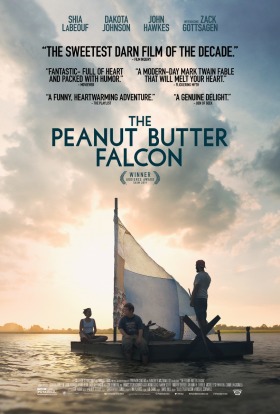