Review: 'Nomadland' Pays Tribute To The Hardships Of Living Life As A Nomad

Searchlight Pictures
Searchlight Pictures
Written, directed, and edited by Chloe Zhao, Nomadland is loosely based on the nonfiction book Nomadland: Surviving America in the Twenty-First Century, which takes an inside look into the nomad lifestyle older men and women live. Frances McDormand plays the character Fern, who has to adjust to living in a van as a modern-day nomad after her husband passes away and her hometown suffers an economic collapse. The beginning of the film explains that in 2011, the company town of Empire, Nevada was shut down by US Gypsum after a declining demand for sheetrock, which caused the town to be abandoned so much that its zipcode was discontinued in the span of six months.

The subject matter is a sad one, as the film does not romanticize nomad life while also showing Fern grieving underneath a tough exterior. Fern keeps herself closed off, probably to prove that she's can handle her hardships herself, as she has done so her whole life.  Despite her closed-off nature, she remains open at face value, especially while learning from other nomads how to live as one of them. The nomads, for the most part, are all real nomads, who share real stories of how they wound up living on the road. Their stories are similar to Fern's, and most of them revolve around experiencing loss of some degree.
But while the film has a hint of sadness within its tone, it also can be perceived as uplifting. By showing real nomads and the community they have built, the film has a hidden sense of comradery that is inspiring. These moments are few, but hold great weight, which makes the moments of showing this lifestyle as lonely all the more tragic. Through the use of cinematography and Fern's journey as a nomad, the film acts as a metaphor for emphasizing how beautiful living as an American pioneer can be but also highlights how small an individual can truly be.
The casting of McDormand as Fern was a brilliant one. I mean, she's a two-time Oscar winner, so obviously she's an incredibly gifted actor. But McDormand is one of those actors that never feels like her presence is too distracting for a movie, but rather enhances the subject matter of whatever she is starring in. Not many actors have that type of acting ability, and McDormand is one of the few that can. She never takes the spotlight away from those acting around her - especially when it comes to those who are real people - but when she has the spotlight on her, she delivers a performance that fits her acting style perfectly.
Writer/director/editor Chloe Zhao gives audiences an inside look into the life of a nomad without coming across as judgemental for those who do so, but rather as a tribute to that lifestyle. Though it does not show this way of life as the happiest way of living, Nomadland gives proper respect to those who do live this way. 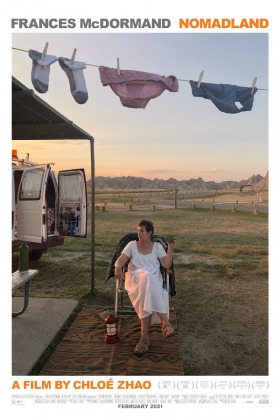 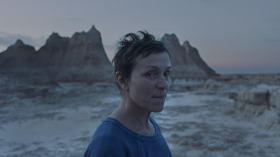