Walt Disney Studios & SSI
Walt Disney Studios & SSI
When it comes to Disney remaking their animated classics, they usually find a way to bring in the best aspects of the originals, while finding ways to switch up the story and make it seem new. We've seen this many times through remakes such as The Jungle Book, Cinderella, Pete's Dragon and now Aladdin.
With this version of Aladdin, they remain true to the original material and change up the things that are needed for an update. The story beats are what remain the same: iconic scenes that we all recognize, memorable lines and so many of the songs we all treasure. The differences come from the characteristics of each character and their personal arcs.
What I mean by this is how the actors take these well-known characters and make it their own. This is especially apparent in Naomi Scott's performance as Jasmine, who is given more of an arc to fleshing out her character as she tries to stand up for herself and show she is worthy of her father's throne. She makes Jasmine able to be more of a strong and capable individual and not having to just rely on chemistry between herself and Aladdin (which still works in this adaptation.) Marwan Kenzari plays the evil Jafar, who through the majority of the movie presents himself differently than his animated counterpart, but is still a villain you buy into.
Will Smith as the genie also makes this classic character bring in a different sort of spark as compared to what Robin Williams did before. The way Smith portrays this genie still feels like the fun-loving kind that William's was, but adds in some old-school Will Smith flare that helps make the entirety of the film a blast to watch. This is especially apparent when he is playing off of Aladdin, who is played wonderfully by newcomer Mena Massoud. So if you were scared by how Smith looked like the genie, I would say you will be okay, It does look a little strange, but it's by no means bad. His portrayal will easily overshadow that and will help your skepticism go down.

Director Guy Ritchie has a certain style to his movies that for me personally, can be hit or miss. His slow-motion action style can work well in things like Sherlock Holmes and then can fall flat as it did in King Arthur: Legend of the Sword. But here in Aladdin, it works out for the better. It helps make Aladdin more visually stunning in its action sequences and really creates another way to separate between live-action and animation. Richie's style also creates an epic vibe to the movie and especially helps make the character of Aladdin more exciting things to do.
Aladdin still brings out everything that is beloved about the original, while finding the right ways to differentiate itself and molds into something new. Fans of the animated 90's movie will remind them of it while watching the changes to be uplifting and refreshing. It'll be another Disney remake that finds that right balance between the two and seems to have stuck the landing in doing just that. 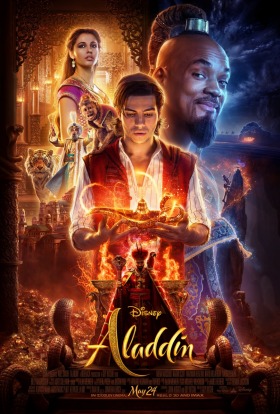 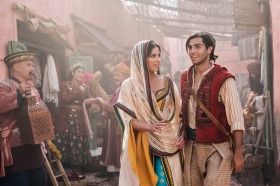 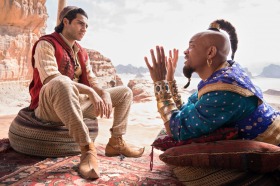 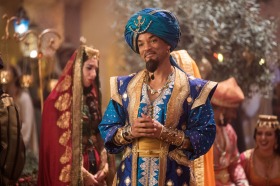