'Pokémon: Detective Pikachu' Is An Entertaining Family Movie For All Pokémon Fans

Warner Bros. & SSI
Warner Bros. & SSI
I can't believe I'm writing this, but we finally live in a world where we have a live action Pokémon movie. Granted, for die-hard fans, it isn't the normal storyline of 10-year-olds running around trying to catch Pokémon and become the best trainers in the world. Instead, it is based on the video game Detective Pikachu, which is about a boy named Tim Goodman who befriends a Pikachu claiming to be a killer detective and they both discover they can understand each other. Naturally, they form a duo to solve the greatest of mysteries.
Pokémon is already a wild premise for those who do not know a thing about the property, but adding in a mystery story to it adds even more understandable skepticism. If you are one of those people or just a Pokémon fan already that needs convincing that this is worth watching, then you've come to the right place. Pokémon: Detective Pikachu is a great Pokémon movie for all kinds of people.

The story of Detective Pikachu is probably my biggest takeaway from all this. The move of going away from the normal Pokémon formula in order to introduce this world was a smart decision. It helped tell a story that is suited for young children, especially those learning about the world of Pokémon. It also gives a different plot to fans of all sorts, who may have gotten tired of seeing every Pokémon story being about a child running around "catching 'em all." It also is a great stepping stone for those who lack any sort of Pokémon knowledge without feeling bored or overwhelmed when learning.
Director Rob Letterman and his writing crew found a way to get the right balance of treating this as a love letter of Pokémon while also helping shmucks such as myself understand what this world is about and why I should care. While I did find its script to feel a bit clunky at times in terms of focus, I found myself thoroughly enjoying the kind of movie it was. It felt like an entertaining kid's movie with hints of detective noir for adults. There is plenty of Pokémon action to enjoy and heartwarming scenes that will hit home for just about everyone.
Okay, so is Ryan Reynolds playing a PG version of Deadpool?
Yes, but that's okay.
Ryan Reynolds is a talented actor who does have more range than people realize (I recommend seeing Buried) but him going to his Deadpool roots was a smart call. Again, it's PG Deadpool, but Reynolds has great comedic timing that works for any rating. He delivers all sorts of jokes that hit for all age groups but also finds a way to make Pikachu even more beloved. He truly is the anchor of the movie, and his on-screen chemistry with Justice Smith's character Tim is evident and believable. If it fell flat, the majority of this movie would not work.
I never thought that I would ever see Pokémon look so realistic, but Warner Bros. & Legendary pulled it off. Every single Pokémon you see is exactly similar to the games and shows and is turned into looking 100% realistic. Hardcore fans will love seeing their favorite Pokémon come to life, and will definitely help target young kids to want to check it out through other platforms.
So many moving parts had to work out to where a movie such as Pokémon: Detective Pikachu is a success, and I think it all came together perfectly. It's a movie that can appeal to all audiences, whether you're a Pokémon fan or not, and will have people enjoying a detective story in a brand new world. It has so many elements thrown in to make a summer blockbuster memorable, which is why I'd recommend this to just about everyone. 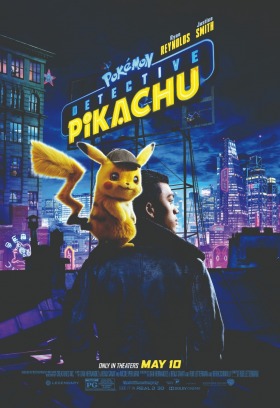